The Paura Church´s Interior ... and How We Entered, Finally! 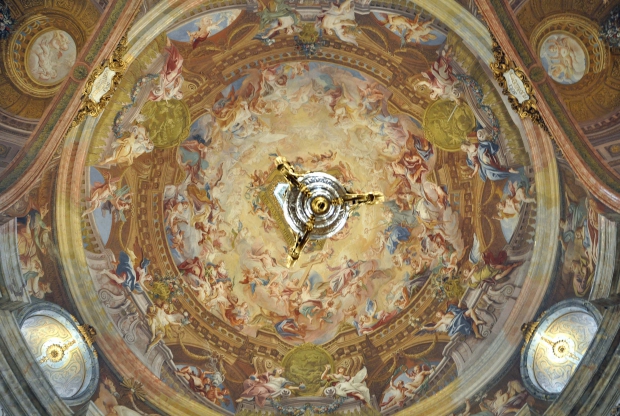 Some weeks ago I posted an article about the baroque Paura Church. We went there in summer to get the idea of what Johann Michael Prunner as architect had created in honor of the Holy Trinity. Strictly speaking, it was abbot Maximilian Pagl´s idea who had worked out the concept. Of course, we didn´t only want to see the facade but also the inner part of the church. On Internet it was said, that one could enter during the day. Well, we were there, tried to open at least one of the three doors, but they were all closed. 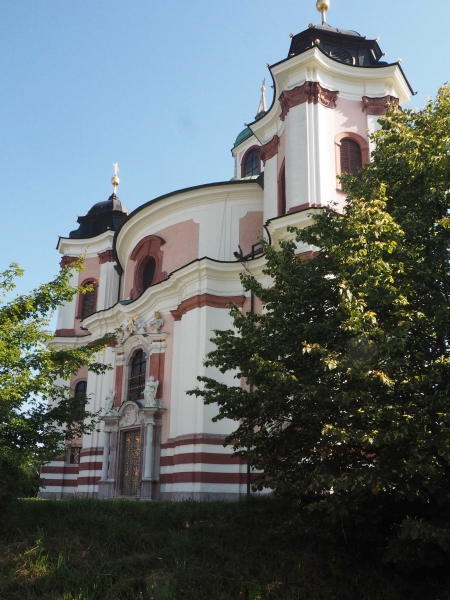 The last time we went there we wanted to be on the safe side. I asked if I might take photos in the church. A nice lady from the parish invited us to attend a mass and to take photos afterwards. As it was a foggy day, a sacristan helped us with more light. When we told him that we couldn´t enter in summer, he answered: the door was open, quite sure, but on warm days the old iron doors change shapes, they become bigger and it is difficult to open them. And with a twinkle in his eyes, he said: It needs a bit of violence … – We were very happy that this time the doors were open. 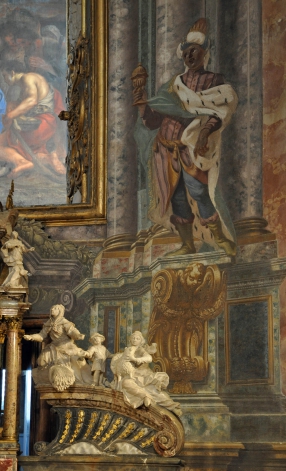 As you will remember the Paura Church is consecrated to the Holy Trinity and therefor everything is a glorification of the Biblical number three. The ground plan is in form of a triangle, there are three main facades, three towers, three doors, three altars – dedicated to Godfather, Godson and the Holy Spirit – with three organs opposite. Depending on the time of the year, the priest is saying Mass in front of one of the altars. As there will be Christmas soon I chose as a first the altar with the Nativity Scene for the photos above. By the way, it is dedicated to the Holy Spirit. 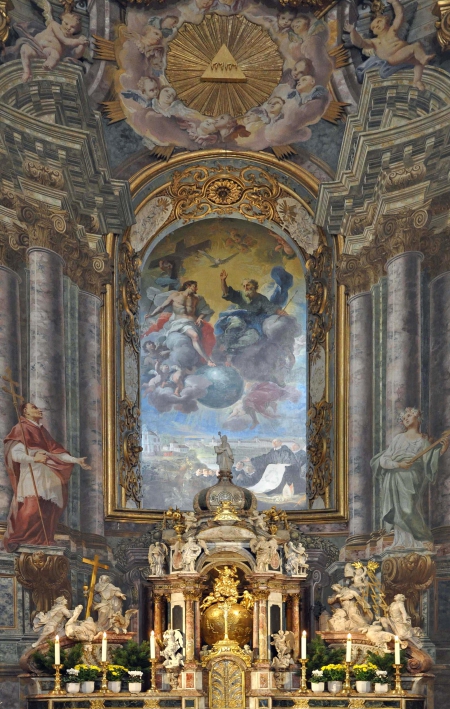 To get the impression of the whole altar, of one of the three altars, dedicated to Godfather, a photo (s. above) with frescoes –  imaginary columns and figures – at both sides. Under the painting which is in a farer background and framed with something that looks like open shutters, there is a tabernacle altar, one of three, with delicate little statues made of alabaster. The reason why I wanted to see the Paura church´s interior was the illusionistic part of the frescoes done by a master of the perspective drawing: Francesco Messenta. He also did the illusionistic architecture painting in the Spital am Pyhrn church, I am actually doing a research about. 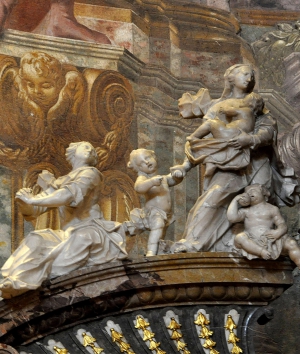 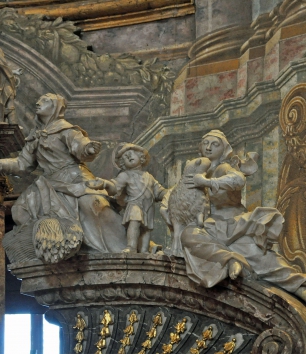 The alabaster statues from the Holy Spirit altar are symbolizing the love for God, the motherly love, which is the love for her children (s. photo above left), and the charity, the brotherly love, and the love for animals (s. photo above right). What an amazing and progressive idea in 18th century art to represent the love for animals. All the little statues (about 50-60 cm high) were made by Joseph Matthias Götz, a German sculptor who had worked in Passau before. It is not easy to understand that only some years later he gave up sculpting, joined the Bavarian army and became engineer lieutenant. Nobody knows where he had studied constructing and engineering. If he had become half so good as engineer as as sculptor he must have been excellent. 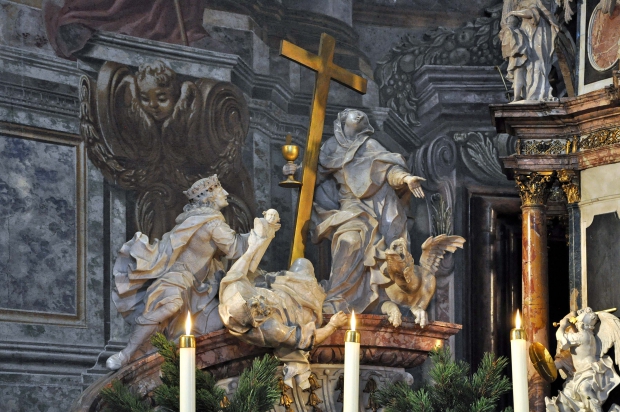