As there were many many messages after the last article about handcraft I asked my friend Astrid Wittki to send me more photos showing the beautiful dresses and needlework she is doing. Everything started with a sewing machine she got from her grandmother as a child without knowing that working with it would become an obsession. She began sewing pillowcases, skirts, trousers and even a “Dirndl” (Tyrolean dress/costume or Bavarian balcony dress), a first step towards producing historic costumes … 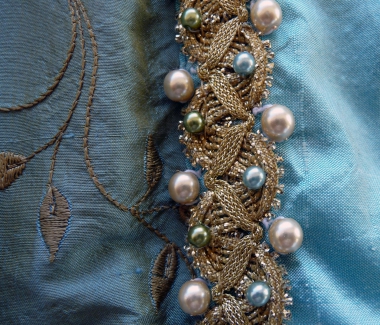 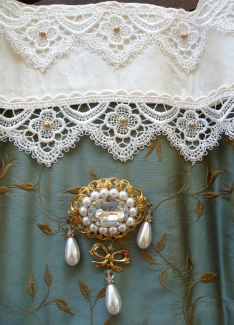 Astrid became very early interested in historic dresses. As a child she liked watching swashbuckler movies and began promptly designing dresses she had seen. Soon she was sewing fancy dresses for the “Fasching” season (Bavarian and Austrian for “carnival”). About 15 years ago she bought her first rococo costume (at Alexandra Brandner´s Gewandmeisterei who is wardrobe mistress) to participate in the Carnival in Venice. Three years later she made a baroque costume (details on the photo above) she wore in Vaux-le-Vicomte, France, where historic dress parties take place. – Even if Astrid is in the moment working on a rococo dress her favorite historic eras are those from Henri II to Louis XIV (kings of France), from Renaissance to Baroque.

Some of the readers may know I share this passion, but my favourite is another, later Louis (number XV). Beyond this I have to confess that I also love contemporary fashion. The two pullovers I knitted some years ago (s. photos below) were one – the dark blue lace knitted – in need of something for the ballet training, the other one has a story on itself. 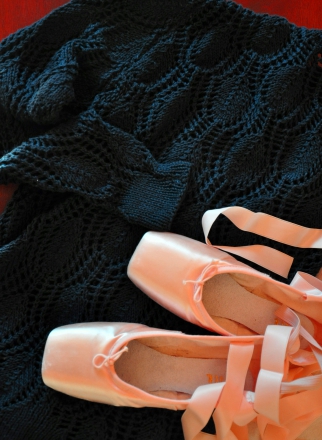 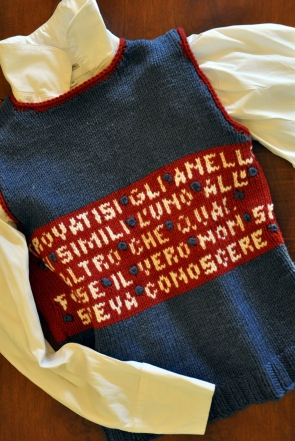 When we were still watching TV (what we stopped 5 1/2 years ago), I had always a music channel on. I like hearing music and watching video clips for their special art. More than ten years ago there was a clip and song by Stacie Orrico (no, it was not “Stuck!”) I liked very much. In the clip she wore something that inspired me to knit the blue and red slipover. The funny thing is the message I put on it: the first lines of the Parable of the Three Rings – in original Italian – even if our German teachers made us believe that it was created by the German poet Gotthold Ephraim Lessing. Nope! Was it not!!! It was a most famous Italian poet´s intellectual creation: Dante Alighieri wrote it more than 450 years earlier and used it in his Divina Commedia (The Divine Comedy).