Duchess Eleonora and her Never Lasting Influence on Fashion*

Eleonora de Medici, born Donna Leonor Álvarez de Toledo y Osorio and Duke Cosimo´s I wife (the later Grand Duke of Tuscany), is credited being the first modern lady, the even first modern female regent, as she served as disposer in her spouse´s absence. By the way, the couple had eleven children, including five sons. Two of them, Francesco and Ferdinando, followed their father as Grand Dukes of Tuscany. 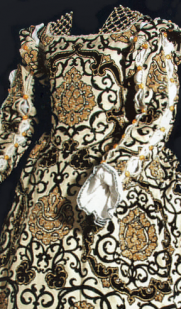 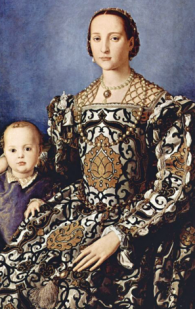 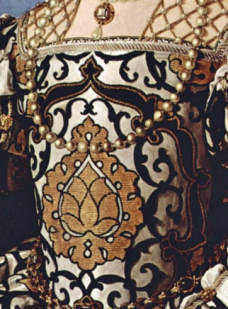 Eleonora became a signature personality for my blog – she was a woman of character, culture and intelligence and was interested in art, fashion and a lofty style. I have to confess that I first fell in love with her when I saw Agnolo Bronzino´s best known portrait that shows Eleonora with her little son Giovanni (s. photo above, on the left: a remake of her dress for an exhibition in Portugal some years ago). I did then not know anything about her life, but was attracted by her beauty, her self-reliant air and of course by the beautiful dress she wears on that portrait. 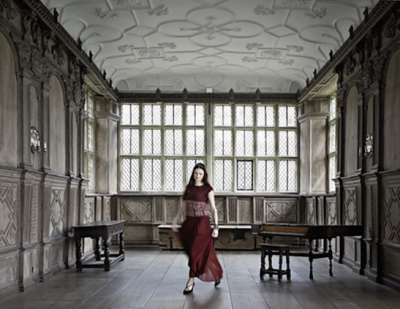 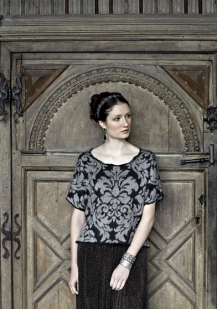 I love this fashion, I love autumn and winter, I love fashionable knitwear and not only wearing it but also producing it since I was a teenager. Though I didn´t know Eleonora de Medici then I still knitted Renaissance pieces she could have worn, later I did Baroque pieces too (s. this article). – What the dress concerns she wears on the portrait, she set a fashion example for centuries. It didn´t only inspire me but also Rowan Yarns (the models on the photos above are by Rowan who do not only produce yarns and most beautiful knitwear but edit twice a year a dearly expected magazine by thousands of readers).

I was wondering if Alexander McQueen (s. photos above) were inspired by Eleonora´s dress when designing these three dresses, two long and one mini version. If one asked me, I would prefer the mini dress with the long boots as another fashion ideal are the four Musketeers whose adventures I have been watching since I was a child. What boots they had! Since the shoe industry has been offering this kind of long boots I always bought them and will soon order a new pair here. 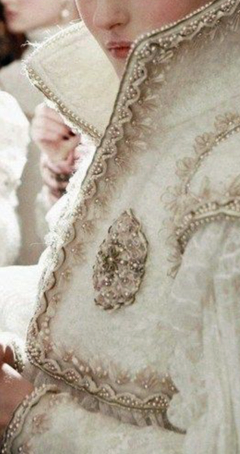 My since always and ever adored artist and fashion designer is Karl Lagerfeld and everything he has been creating for Chanel. Even if he is avoiding huge patterns like that on Eleonora´s dress, he likes to inspire himself from history and historic styles. Some of my favourites by him were shown at the Edinburgh fashion show in 2013. The models presented dresses that could have been worn by queens some 400 years earlier. And they look so fresh, so elegant and so wearable. It only needs the right occasion, a beautiful autumn or winter night and some (fashion) admirers. And of course shoes or boots by my friend Giuliana Venerosi-Pesciolini (this pair e.g., s. photo below). 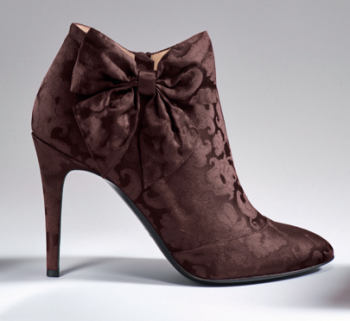 *Repost of an article that was online some months ago. Somebody tried to hack my account via this article. So I had to delete it. As it was a favorite of mine I copied text and photos and edit it once again.