Why We Had a Vegetarian Lunch on World Vegan Day

Some of the readers will know, that I prefer eating plant based (vegan) food to any other. Don´t worry, our meals are on Michelin star level as I am always aiming to cook and to serve the best. Only the best! All the food we buy is organic and the recipes I use are as refined as possible. I adore what the French star chefs are creating day by day and own many cookbooks by them, such as by Paul Bocuse, Alain Ducasse, Alain Passard etc. I cook – using vegan and vegetarian recipes – something plant-based out of it. 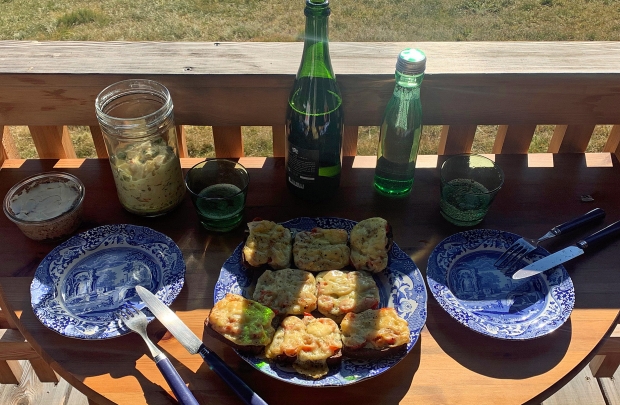 On World Vegan Day we had the idea for a last picknick in this year, we took on the balcony of our Alpine hut. As always I prepared three snacks, usually all vegan, but this time there were also cheese toasts on the table. Why? We had had guests, family, they are cheese lovers, so I bought a nice quantity of – vegetarian – cheese and used the rest for the toasts (we call this fridge clearing). Vegetarian cheese? Cheese IS vegetarian! Nope, usually not! And why? Because it is made of calf rennet! Since I have known this I have always bought cheese made with microbial rennet. For cheese lovers: it tastes absolutely the same. 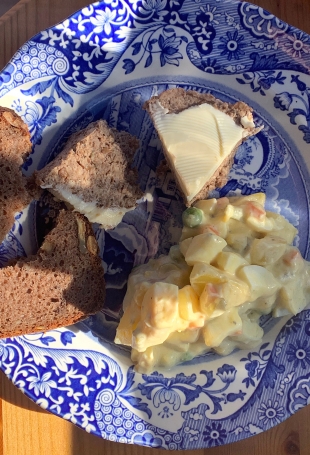 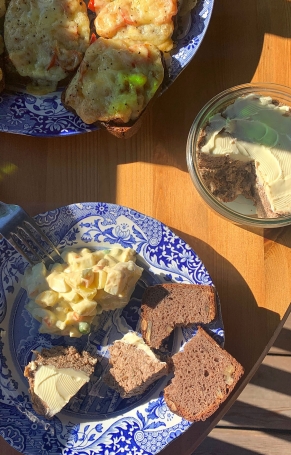 The good rest was of course vegan. I found a recipe for “Russian Salad” (had no idea if it was Russian Salad in English too, I translated it literally and found yesterday, funnily, a similar English recipe for Russian Salad) which was a must on every party buffet in my teenager and student´s days. Our salad was made of cooked potatoes, carrots, peas, pickled cucumbers, mustard and vegan mayonnaise. – The other thing you can see on the photos above was the most delicious Faux Gras (this is the expression for plant based Foie Gras). The recipe was created by Michelin starred chef Alexis Gauthier, please read it here. 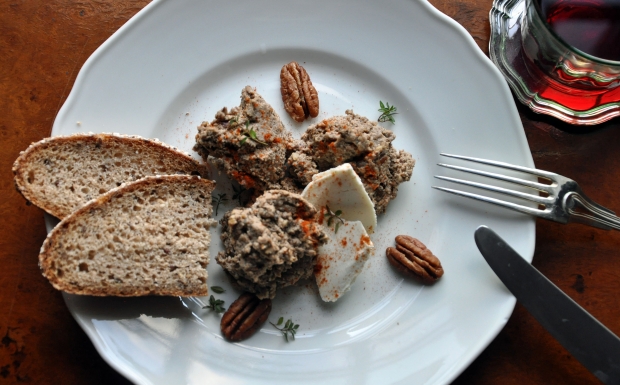 I still have had a recipe for Faux Gras on the blog (see here), the actual one is maybe a bit more refined. But the cruelty-free Faux Gras number 1 was a big success too, as a friend of mine who took it, asked: Is there really no meat in? (she is totally vegan and animal right activist). This plant based liver paté tastes very rich, and the spices and herbs make it so original. Give it a try, serve it as primer and don´t tell that it is made of vegetables. Nobody will find this out. Even convinced meat-eaters will think that they are having the real thing. 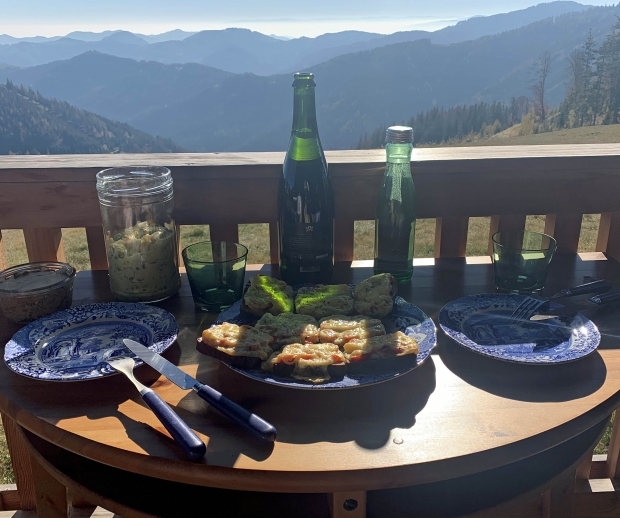 Austrian saying* regarding the plant-based lunch: There is no sin up on the alp because even a devil won’t climb up (s. photo above)

* In German it is a rhyme