The View? Gone with the Wind*

Since I was a child I (who comes from Vienna) wanted to live in the mountains. My wish was happily fulfilled, and I have been living in the most beautiful landscape for many years. In 2003/2004 we run the risk of losing our paradise. Our neighbor planned then to build thirteen windmills on the peaks of the mountains, seven of them would have surrounded our house! My husband and I were so outraged that we started to do everything we could do against this (until now there are no windmills there). God heavens. 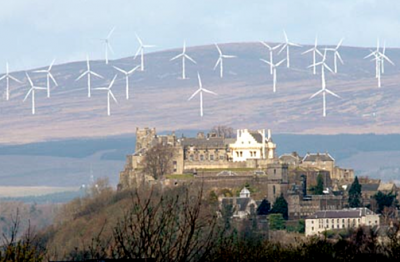 Two of the silliest enforced projects (s. photos above) are in Scotland, one is near Sterling Castle, the childhood home of Mary Queen of Scots, the other one is near the Saltcoats Esplanade – wind turbines dominate the landscape. I am always asking myself what have people in mind when they destroy the most beautiful places? There are of course much more disadvantages arising from building these dreadful monsters: they kill birds and bats, cause stress and diseases when you are living nearby, don´t produce electricity* and so on – if somebody is interested I will publish many others.

The reason why I am writing this? Some days ago my husband and I met people from Upper Austria and Carinthia who are like us defending the beauty of the landscape, where they are living, against wind craft. One of the topics we discussed – the Styrian government decided some weeks ago – against their promise in the last years – to sextuple the wind craft! We are angered, outraged, disgusted. 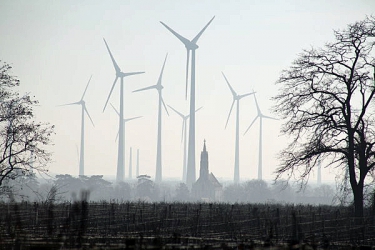 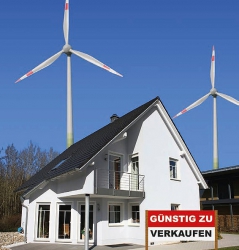 Here another reason why one should be against wind craft. If you happen to own a house where there are windmills nearby you will wish only two things: to leave promptly and to sell your house. And you will realize that you are hit much more harder as you will have thought – you will have to bear a big loss in value, you will get almost no money for your property, and you will find nobody to buy it.

I cannot help – windmills remind me of huge graveyards. Huge! Look how tiny the houses are (s. photo above, right). And what healthy living concerns, it is not possible: many of those who live nearby suffer from bad diseases, particularly children are vulnerable to headache, lack of concentration and learning disorder. It must be our aim to protect them and to fight for them against wind craft.

**In Germany where there are about 30.000 wind mills, they produce only 1,19 % of the total generation of energy, that is less than the annually additional consumption.