When I found some days ago the first violets I created the white chocolate pralinés and decorated with violets. I usually do not take too many flowers as the bumblebees and all the other insects need them for their dinners. – My husband and I love chocolate. Who does not? (the other day I read something funny: chocolate has no season, thank the lord!). One of my favorites is white chocolate which is easy to make and you can also cover strawberries or raspberries with. And violets too, which was very popular in the 19th century. Demel, one of the traditional pâtissiers in Vienna who was then purveyor to the court created candied violets or “violettes glacées”. 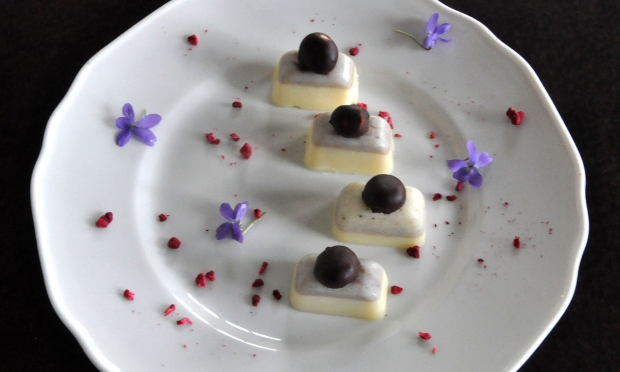 Gently melt coconut oil and cacao butter in a small pan over very low heat. Add the sugar (I had no coconut sugar at home and took brown organic cane sugar which created the funny brown and white effect of the pralinés) and the vanilla powder and whisk until the sugar dissolves. 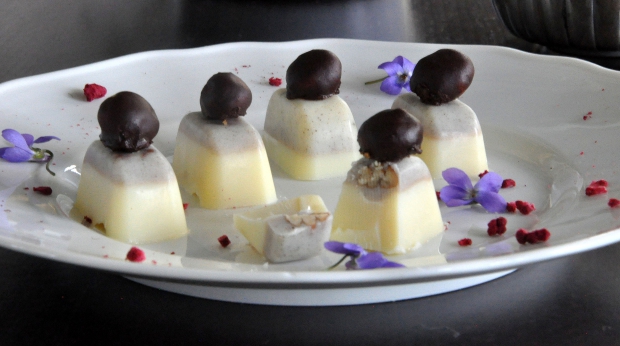 Put pecan nuts (one nut for each praliné) into molds or into an ice cube tray and pour the liquid chocolate over it. Let the mixture cool for half an hour and put it then in the freezer for some hours. It is afterwards easy to get them out and arrange on a plate.

To cover the macadamia nuts with 70 % chocolate melt chocolate and 1 tsp coconut oil in a small pan over very low heat. Stir well and set aside. Put the macadamia nuts in, one after the other and take out with the help of a fork. Let cool on parchment paper until the chocolate cover is solid and put on top of the pralinés. Arrange on a plate with violets and freeze-dried raspberries and serve with tea or coffee.