Today´s two recipes were inspired by my favourite chef Matthew Kenney. He lives in the United States where he runs restaurants and has even established an academy to teach the methods of his special cuisine. It is one of the healthiest, most delicious, most flavourful and most artistic in the world. It would take hours to explain why and what they are exactly doing, so I prefer to link to their website as well as to their Facebook and Instagram accounts. Take your time and enjoy reading, scrolling and watching. It is a magic world. 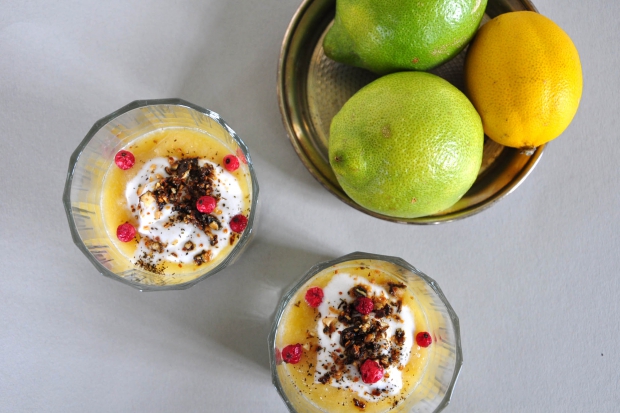 *Ananas = pineapple who was first cultivated in Europe under **King Louis XV of France who*** would then have had a better immune system and certainly not have died of smallpox.

Matthew Kenney and his team have of course edited some cookbooks. You will find most of the titles here. The last copy I bought was this. I suddenly fell in love with the Pineapple-Ginger-Spice-Smoothie that inspired me to create a pineapple cream in layers. 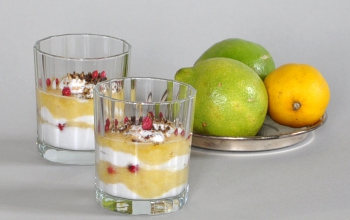 Blend all ingredients (besides yoghurt and vanilla) in a food processor until smooth.

Stir the yoghurt with a spoon until it is creamy, add vanilla powder and – if you want to – a tiny quantity of a natural sweetener.

In a glass layer pineapple cream and yoghurt. Decorate with dried red currants and the slightly roasted pumpkin seeds. 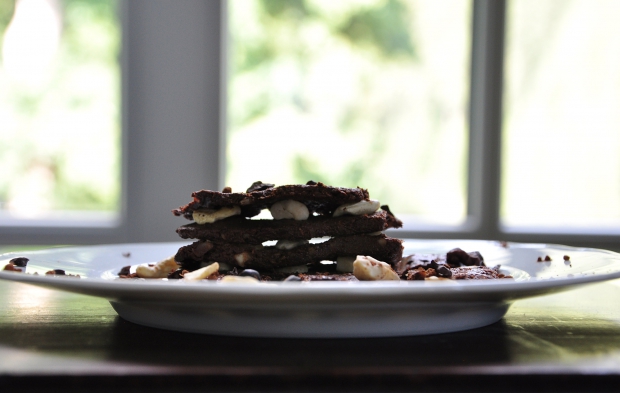 The other recipe – the solid Hazelnut-Chocolate-Cream was inspired by the mouthwatering “Deconstructed Tiramisu”. I was especially interested in the layer on the far left (layer number four might be the same), – it was something I needed urgently. So I created this cream. It really was delicious, there was only one problem with the texture – it didn´t become as smooth like that from Matthew Kenney Cuisine. When I started blending our cat Topolino**** took a nap one room next to the kitchen. He hates the noise, so I stopped blending earlier as I would have to. You will find tiny hazelnut pieces in my cream. My husband who is a gourmet confirmed that it tasted as if Matthew Kenney had made it 😉 …

****By the way, Matthew Kenney owns a beautiful cat whose name is Rumple and who has got an own Instagram account some weeks ago.

Blend all ingredients in a food processor (besides the cashew nuts) – for at least 1-2 minutes. It should be smooth. If you have a cat sleeping nearby stop earlier.

Spread onto baking paper (about 5 mm) and put into the fridge for some hours. Take out and cut into similar rectangles.

When decorating start with one rectangle, put three cashew nuts on it (left, middle, right), the next layer of cream, nuts, cream, nuts, cream and stop until it looks like a small piece of cake. Spread cocoa powder on it and serve with cocoa nibs.