Exhibition at the Albertina in Vienna: Rudolf von Alt and his Time (19th Century) 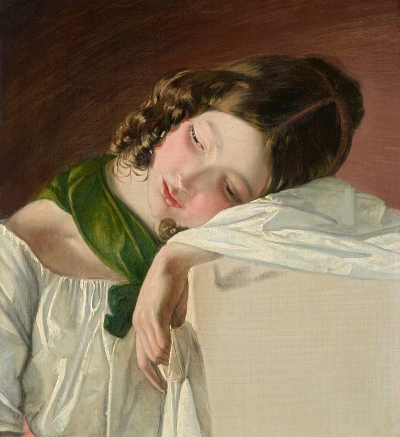 Although I usually prefer baroque art to any other, I realized in the exhibition that I loved the 19th century paintings more than the baroque ones: the delicate colors, the calm in the pictures, be it an interior, a landscape or portrayed people such as the young girl by Friedrich von Amerling (1834, s. photo above). When watching the paintings every stress is far away. You tiptoe from room to room and become part of this beautiful silence. 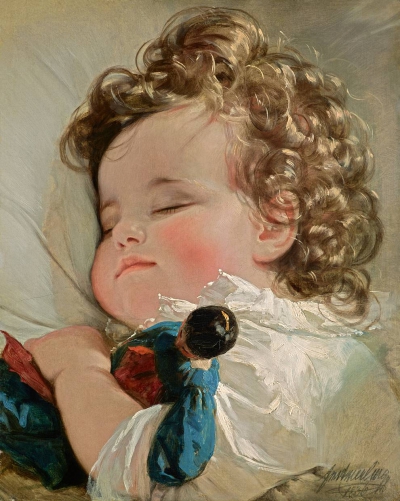 You do not want to awake the baby girl, Princess Marie Franziska von Liechtenstein (1836), who was two years old when Friedrich von Amerling portrayed her sleeping. I think that I have never seen a more realistic painted sleeping baby. If you know how a baby looks like sleeping on a warm summer day, you know how rosy its cheeks are, how light sweaty the hair is and how the sweet little thing is smelling when it awakes. Nice detail: how the little girl is holding her doll. 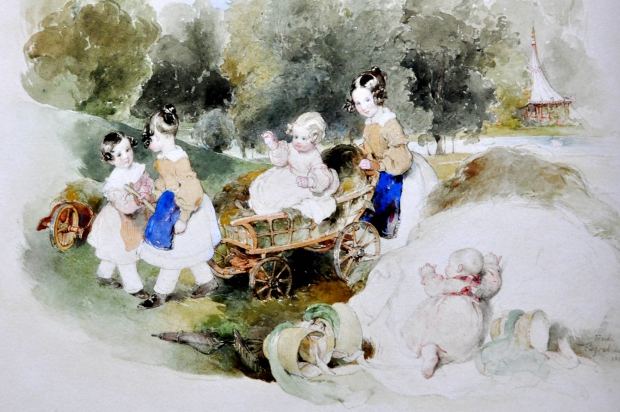 Children became a big theme for the painters. How they moved, what the wore and how beautiful they were. I love Peter Fendi´s paintings of glowing children with the nicest round heads, the most beautiful Biedermeier hairstyles, ribbons, fabrics and hats. See the very typical three straw hats next to baby on the right side. There are five girls to be seen on this aquarelle. By the way, you know the eldest one, Princess Marie Franziska (the fourth from left on the photo above), the former sleeping baby, who is shown with her four sisters. 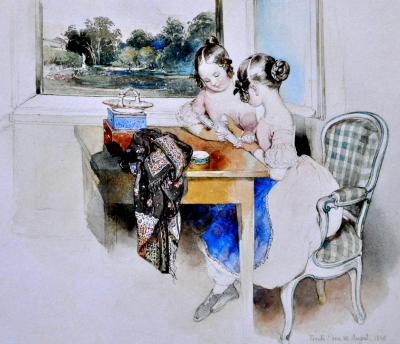 A typical Biedermeier interior scene – once again Princess Marie Franziska with her sister Karoline by Peter Fendi (s. photo above), occupied with a lecture at a desk. Typical Biedermeier means e.g. the simple and light room, nothing grandiose, no guilt furniture in, as if the girls were in a country house. But the two princesses are of course in a castle, in Schloss Eisgrub in Moravia, then part of the Austro-Hungarian monarchy. Through the open window there is a beautiful view onto the marvelous park that still exists. 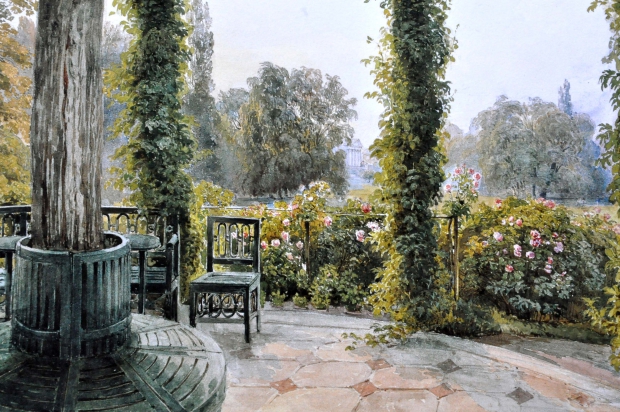 My absolute favorite picture in the exhibition: pavilion in the garden of the Garden Palais Rasumofsky in Vienna (Joseph Höger, about 1837, photo above). I would give a lot to spend some hours on a summer day there: to smell the roses in the architecture abundantly covered with vegetation, to feel the warm and sunny day under the pavilions roof, to have a look into the romantic English garden and onto the palaces facade in the far middle of the painting. 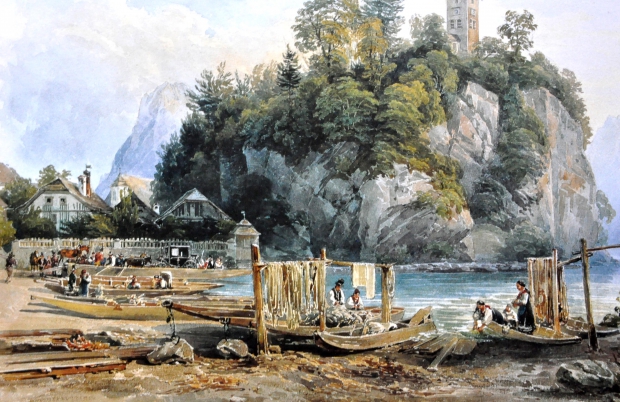 To spend some weeks in the countryside became – at least during the summer months – a social must in the 19th century. As Kaiser Franz Joseph had a nice middle-class villa in Ischl, many members of the court society followed him there or to the near lakes of the so called Salzkammergut and enjoyed the rural life. Traunkirchen at the Traunsee (by Joseph Höger, s. photo above) was to pass by boat on the way from Vienna to Ischl. 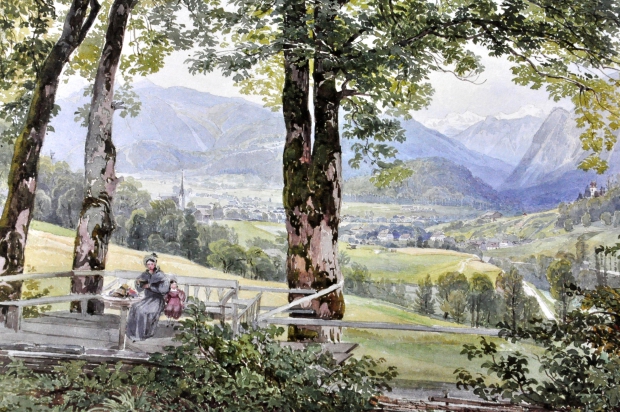 Last but not least, the Sophien-Rast (Sophien´s rest or halt) by Joseph Höger in Ischl, named after Archduchess Sophie, Kaiser Franz Joseph´s mother who was one of the first in the family to come there. Ischl had since the beginning of the 19th century a good reputation as health resort, it was famous for its water. Drinking it several times a day for some weeks, it could heal many bad diseases.