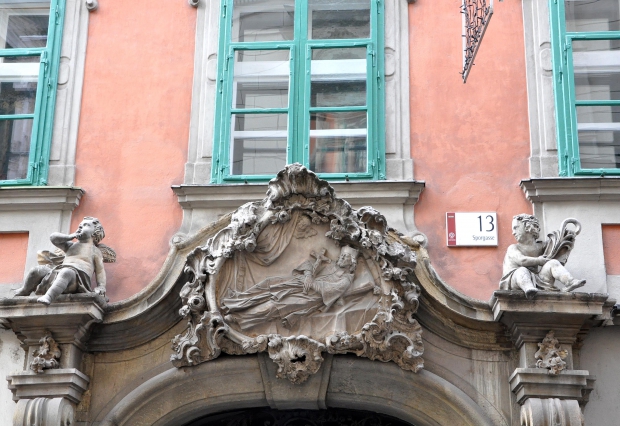 Some days ago – it was very cold, minus 3 degrees Celsius, but almost sunny – I decided to take photos of some baroque jewels in Graz. I concentrated on two things: architectural details (s. photo above: the stone sculptured figure and the putti above the portal Sporgasse 13) and on an impressing staircase, very special as it is a building on its own in the middle of a court, s. photo detail below. 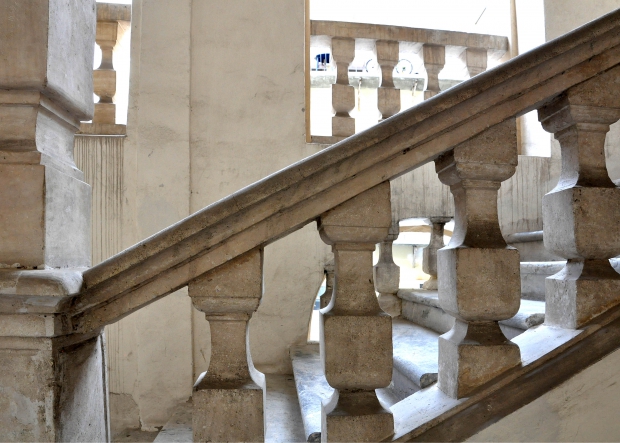 Coming from the Sporgasse I passed these buildings (s. the two photos below), all of them on the Mehlplatz. Under number 4 there is the red former middle-class house with pilaster strips, heart-shaped areas, looking like heraldic cartouches with stucchi leaves around, and in the middle a medallion with the mother of God and the baby Jesus. 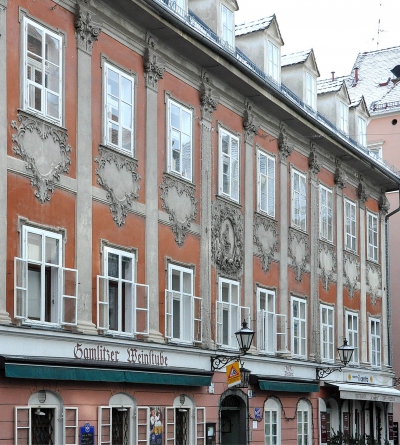 Right opposite is one of several Palais Inzaghi on an L-shaped ground view. Dominating the light blue facade are the window frames with baroque stucco decoration. Robert Stolz, the famous Austrian operetta composer lived as a child with his parents in this house. 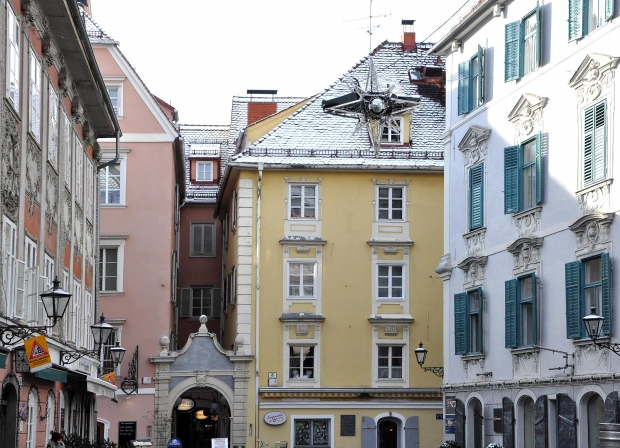 Turn to the left, direction Glockenspielplatz where you see the former Palais Herberstein (then Palais des Enffans d´Avernas), a light grey building with Renaissance gazebo. The most amazing part of the edifice is the staircase in the middle of the court. 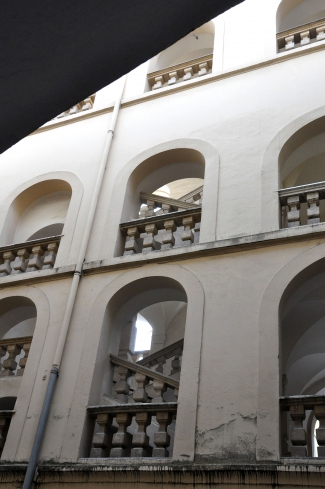 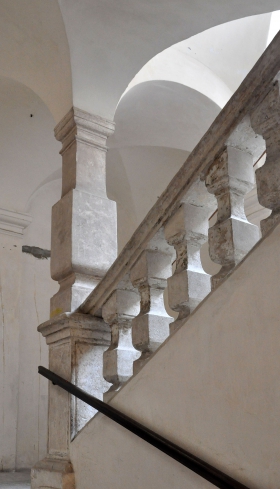 On the photos above you have a view from under the entrance bend to the facade of the staircase (left) and to the stairs leading up towards the next floor. You can look through to the other side, it is open on both sides. The inspiration came from the Italian loggia. As a staircase it is unique in Styria … and I think in whole Austria. 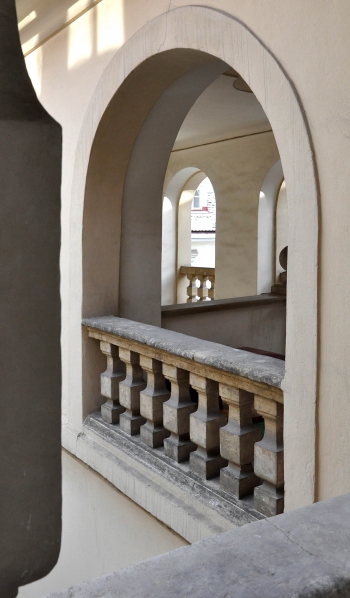 Afterwards I went to the Southern part of the Herrengasse and stopped in front of the former Palais Stubenberg (s. photo below) at the corner Hans Sachs-Gasse. I always wanted to see more from the architectural details, particularly the fruits, hanging on ribbons. 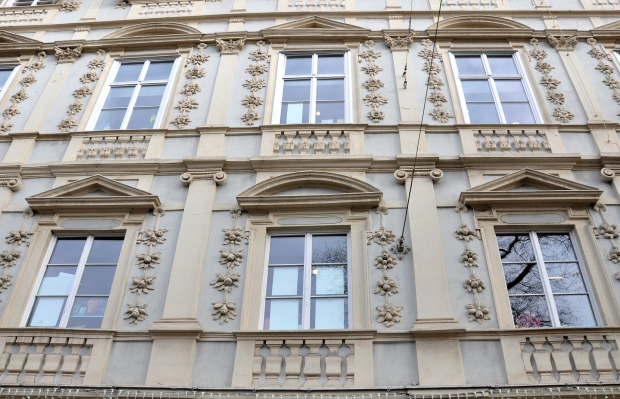 You can never see more than on photos (especially me who is very short-sighted) – every single fruit was handmade of plaster. There are apples, pomegranates, quinces, melons, grapes, hanging on ribbons which seem to come out of plantlike decoration pieces. 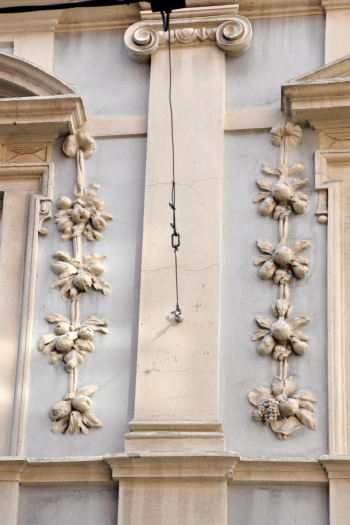 As I love fruit baroque arrangements very much I took my way back where I had started the tour, on the top of the City. The former residence of the Dukes of Inner Austria is there and the dome with the amazing Mausoleum. On its facade you also find fruit arrangements, maybe a little bit more refined and more artistic. 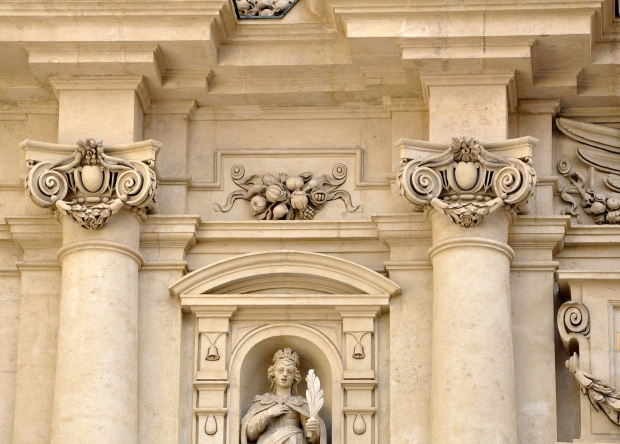 Fruits and facades of the Palais Stubenberg and of the Mausoleum (s. photo above) are influenced or even made by Italian artists. Italy is near in the South of Austria, and the Italian artists, architects and craftsmen were sought after. So it is not astonishing that the place around the Mausoleum looks as if it was in Rome. 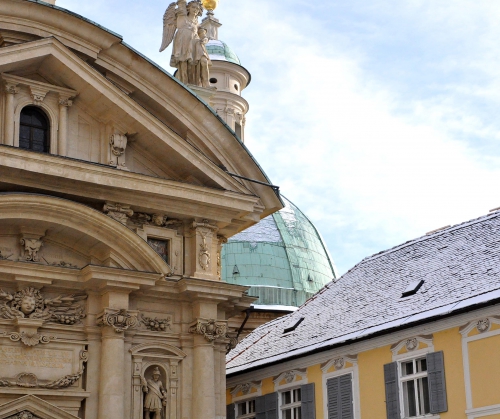 *Baroque means art, architecture and culture in the 17th and 18th century.