Once Upon a Time when Theatre was (Almost) Everything ...

Today we cannot imagine how popular theatre was in earlier times. The people had no radios nor television nor telephone sets, nor computers, nor iPads – that meant: no daily news and no entertainment. You got news then in church during service, in the next pub, by readers in the street or in theatre. There were public theatres and ecclesiastic ones run by the Roman Catholic orders. The Jesuit Order in Vienna had a university and a very popular theatre. Everybody went there to see the performances, even the Emperor and his Family. 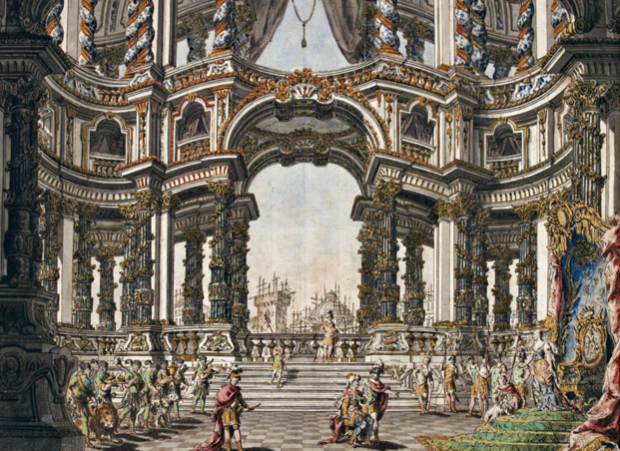 Under the theatregoers were also the Cistercian monks from the nearby Heiligenkreuzerhof. Pater Alkuin*, who is today Cistercian monk at Stift Heiligenkreuz in Lower Austria and theatrologist, and I, who is interested in everything that concerns baroque, have wanted to see the existing part of the theatre for a long time. It is a huge, restored and modernized hall (800 square meters) with the original ceiling fresco by Anton Hertzog representing the Assumption (Assumptio Mariae). 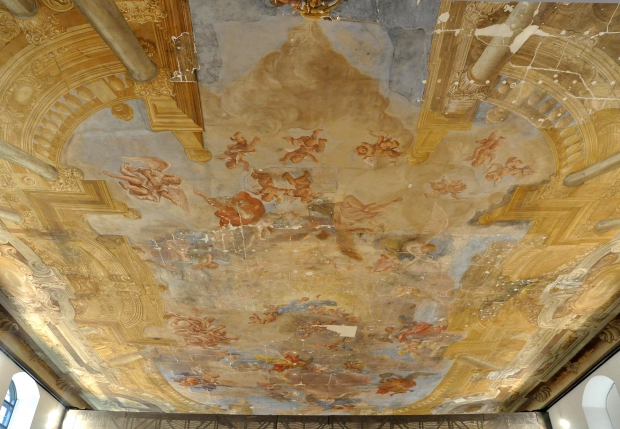 Even as one can see the most part of the painting, it is originally taller as a small part is hidden by a mobile wall. It serves to reduce or to enlarge the space for the events (s. photo below). To get the idea how huge the hall is, one has to compare with a man: s. Pater Alkuin who was standing opposite from me in an opening. The windows in two floors imply that there were two levels with seatings for the audience. By the way, the seatings were then U-shaped arranged, like theatre loges in our times. They were built like staircases, without cushions, sitting there must have been very uncomfortable. 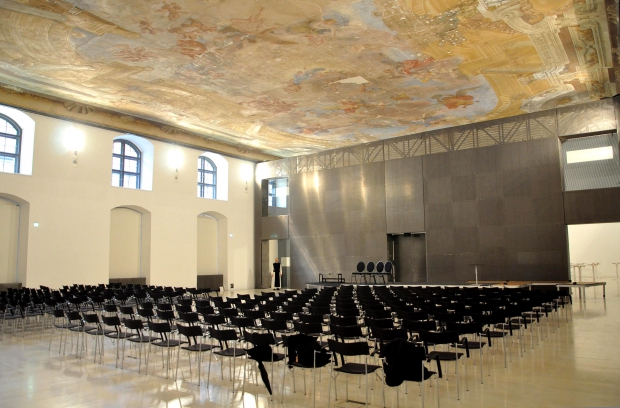 We were received by Mag Christoph Kiener** who showed us around and gave us many interesting details. One was that nobody exactly knows why the ceiling had a convex part at one side. It was there where the auditorium ended and the stage began. The stage was huger than the auditorium, as the space was needed for mass scenes, stage settings and machines that made people fly and boats riding the waves. 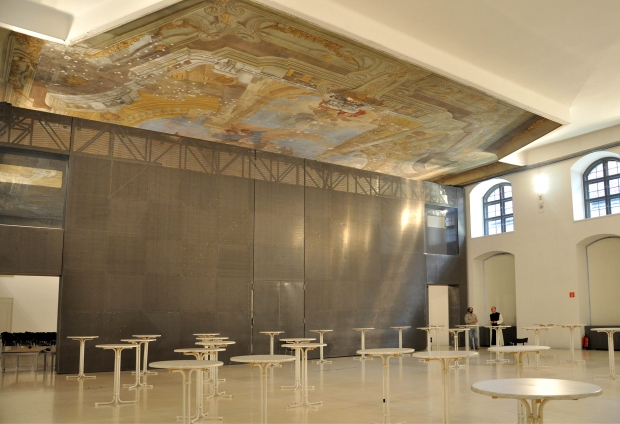 A part of the ceiling (s. photo below) I like very much: numerous angels and putti are flying in the clouds. These little beings in the paradise are witnessing the Assumption of the Mother of God. The ceiling fresco´s theme is a proof that there were not only theatre performances in this hall, but ceremonies for the students, lectures, disputes and commemorative events. It was a kind of multi-purpose hall, focusing on the (Roman Catholic) religious topic as it belonged to the Jesuits, then a mighty and influential order to the emperor. 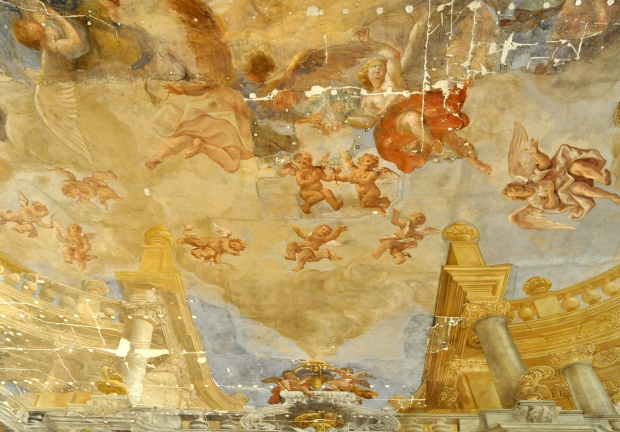 *Professor DDr Pater Alkuin O.Cist. is vice rector at the Stift Heiligenkreuz Seminary in Lower Austria where he teaches Ecclesiastical History. He is also the monastery´s archivist, edits the Analecta Cisterciensia and writes regularly for his blog. His article about our visit at the Jesuits´ theatre has been posted some days ago.

**Mag Christoph Kiener BA is working with Aula-Wien who rent the hall for PR events, festivities and weddings.