I love spinach, radicchio and mushrooms and I am addicted to crostini. Healthy crostini! Mine are made from self baked bread (this recipe) or from organic buckwheat bread and stuffed with an enormous amount of spinach. When I was a child, I hated spinach like every child in the world, as we all got then ready made spinach meals from the deep freezer one bought at the next supermarket. To make it “better” and “more nourishing” a roux was added that contained much flour. Every vegetable meal became tasteless because of that. 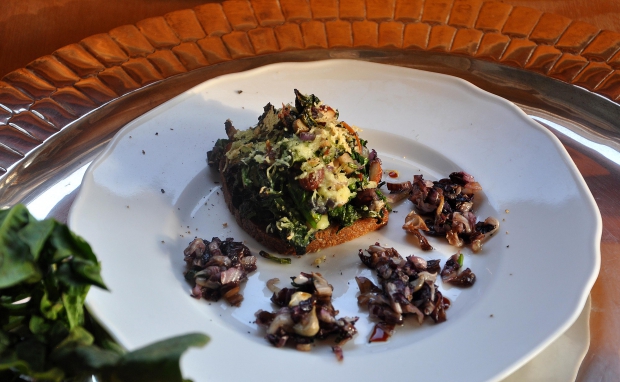 Brush bread slices with oil, salt if you like, and toast them in a toaster or roast in a pan.

Cut onion, garlic and mushrooms and roast in a pan with oil. Cut (or do not cut) spinach leaves, add and cook until wilted. Salt, pepper. 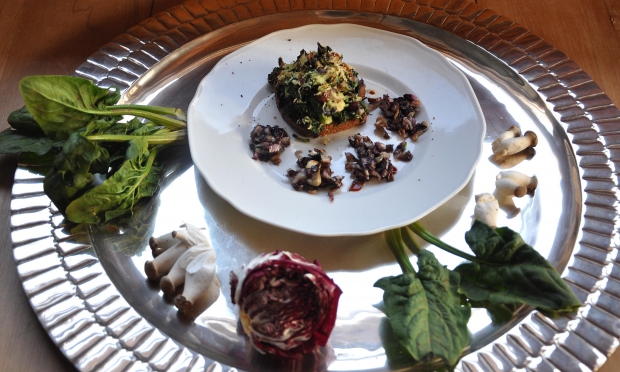 Put toasted or roasted bread slices on a tray lined with parchment paper. Add the spinach-mushroom-topping and the grated vegan cheese. Bake for some 10 – 15 minutes in the stove (180° C with fan, 200° C without).

Serve with lukewarm salad. I cut and roasted radicchio leaves in oil, added salt and pepper and balsamico vinegar. Enjoy!

*Crostini are slices of grilled or toasted bread and toppings.