Did You Know that the Red Squirrel Dies Out? 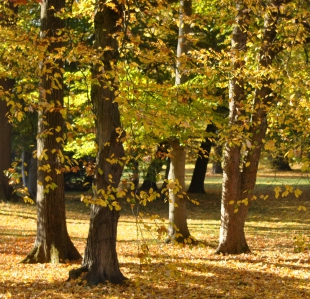 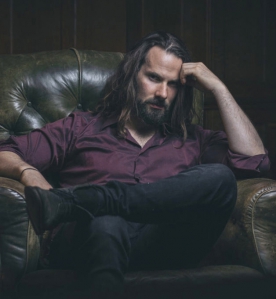 Some of you will know that I am regularly reading the Eluxe-Magazine with articles about sustainable lifestyle, natural cosmetic, vegan leather brands, plant based recipes and so on. And there are interviews with people who are living that lifestyle and even do more than that: Randal Plunkett, 21st Lord Dunsany, is one of them. He owns a castle in Ireland and is a filmmaker too, vegan, animal and nature lover and: he cares about the future of the red squirrel. 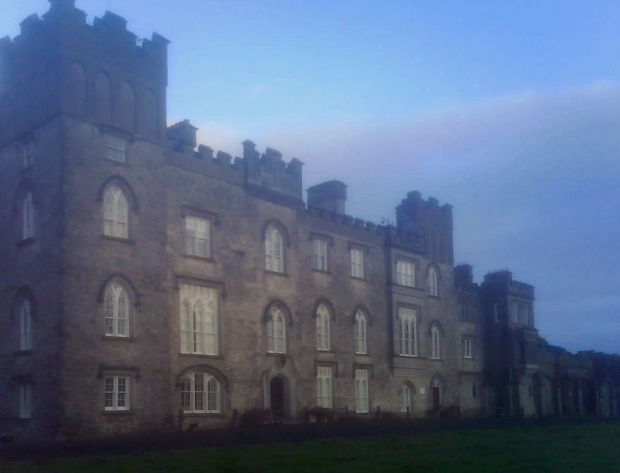 The huge grounds around the castle are going transformed by Lord Randal from garden into a forest to encourage plant and animal species that are on the brink of extinction to thrive for future generations. He has left everything grow, trees and weed, as he believes that they will absorb the chemicals and heavy metals out of the soil. The family have even given up farming on the estate as they don´t want to lose all natural heritage as a result from farming, over-harvesting, having animals in cages destroying the land. 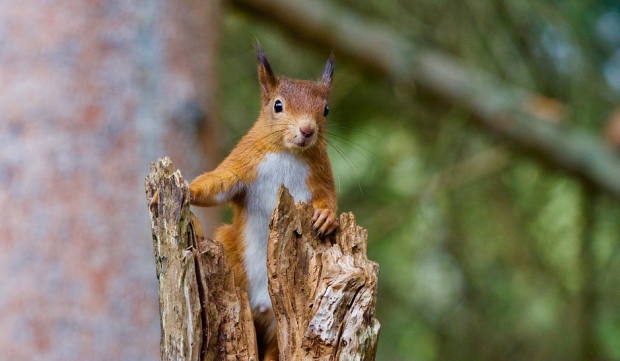 What kept my attention in this article was that Lord Randal wants to get one of the universities to help to reintroduce some red squirrels at Dunsany. Do you know why? The red squirrel is endangered. The main cause behind their decline in the UK is the introduction of grey squirrels from America. They grey ones carry a disease which doesn´t appear to affect their health but often kills red squirrels. They decimate the red squirrels´ food and as red squirrels are put under pressure by them, they will not breed as often (read more about red squirrels here). Another huge factor in their decline is the loss of woodland – something Lord Randal, and our family too – are trying to help to increase their population. 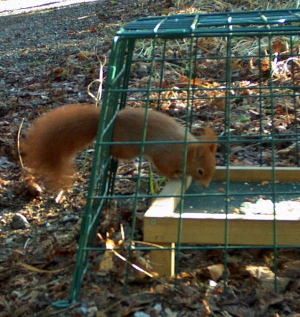 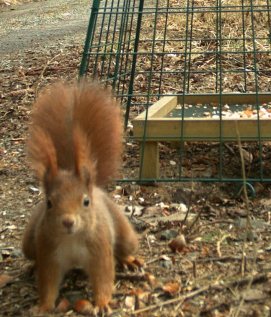 Some snapshots (s. photos above) from the photo trap showing red squirrels taking a snack in the restaurant my husband has opened for them. The cage is there to make sure that no taller animal takes the nuts and seeds away. On the photo below left: the one and only picture from the nut container with squirrel that fetches nuts. It has to open the lid and to take the nuts out one per one. The other one on the right side, below, holds and nibbles a nut. They are loners and do not need company, even not their closest family. A kind of philosophers under the animals. Maybe this is one of the reasons why we love them so much. And because what they are doing looks so humanlike. 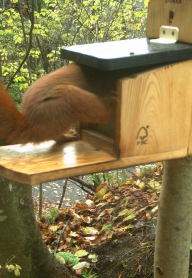 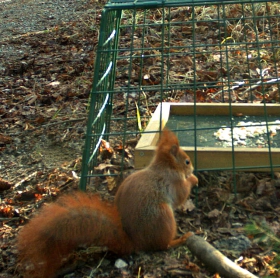 A proof that they do not like to be in company of each other, s. photo below: the red squirrel seems to say, “When in God´s name will you have finished your meal? You have been long enough in the cage!” – By the way, the dark squirrel on the right is also a European one. Luckily there are no grey ones from America nearby. But the red squirrel has many enemies, predators and us: road traffic is another huge factor in their decline. So help us saving this lovely animal that enchants from the very first moment. 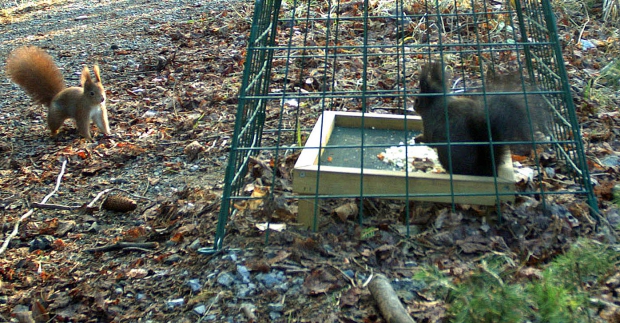